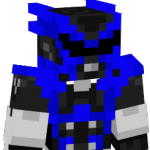 Hello people, I'm BluePsychoRanger and I've been fascinated with command blocks even before I started playing Minecraft in 2014. Since then, I've self taught myself command block coding and created some command modules. I started a Youtube Channel in order to share my creations, and I've been creating videos for a while now.

Seasons Calendar: Craft a Calendar to know the season/month

Magical Crops: Grow resources such as diamonds and potions

Mob Powers (Minecraft 1.8): Obtain some abilities of the mobs you kill

Pigman Companions (Minecraft 1.9-1.10): Find a Companion and hire it to fight for you

There are several tools I use to make command coding faster and easier.

MrGarretto: Command combiner and other tools

Feel free to email me: MCBluePsychoRanger@gmail.com

Retrieved from "https://gamemode4.fandom.com/wiki/User:BluePsychoRanger?oldid=39577"
Community content is available under CC-BY-SA unless otherwise noted.